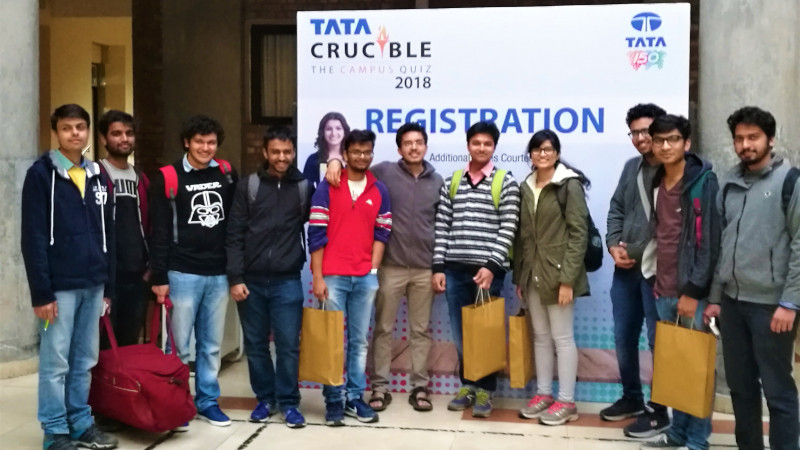 sophos: (verb) the act of being denied access to an online resource in Thapar due to botched up mentality of the administration;
(noun) the great Firewall of Thapar erected by The Holiest, The Venerable, The Sanctimonious, The Greatest of The Greatest, The King of the Kings, The Ignoramus – Center for Information Technology and Management (CITM, TIET) to protect the soft and innocent students from the harsh vagaries of the Big Bad World;

Sigh! I didn’t mean to start off like this. But circumstances have changed. Sophos is activated and hell took a new name and verb. To the uninitiated, this is the name of the network infrastructure used by Thapar to provide internet services.

The start of every new semester brings in new hopes, new positivity and new dreams of ‘undoing’ the wrongs of the previous semester. It starts with a quiet and solemn but seldom kept resolution of maintaining a notebook for each subject. The desire to attend classes to not be in a position to cringe and beg for the 75% at the end of the semester. Also, a little promise, a prayer of sorts meant to the powers that be for good grades. So much of optimism, isn’t it? If only I could live up to my words…

Last year I had missed Tata Crucibles runners up prize by a whisker. This time I had decided to undo my fate of coming second and third in quizzes. I have never actually ‘won’ a quiz. Jamshedpur was too strong but it made me stronger. Chandigarh is good but not Jamshedpur, and if I wanted, I We could win.

But time and fate gave me lemons. Chandigarh was to be the first city of 2018 on 29th January. I got this news on 11th January. Just 18 days for prep is not enough! And Patiala is freezing cold this time of the year. I thought that I didn’t even have time to make a lemonade out of the lemons thrown at me. The start of the semester is usually reserved by me for academic work (yes, quizzing takes a back seat). My efforts in paying attention in classes and being regular are only restricted to the first two months of the sem. The dedication wanes off with time. But this situation compelled me to NOT give my attention to classes right at the beginning. I was not happy with the development. Not at all. Even I love my CG!

Let me not bore you with the prep part. I will zoom through.

It was RD’s last Crucible so she was even more into it than last year.

Perhaps nervousness would be an understatement of my condition on that day. Choudhary and Arora did a non-stop 12-hour prep on Sunday and many more such marathons over the extended weekend. The ground being Aro’s room in Hostel A. I didn’t even meet RD during that time for our prep. I was agitated. Would have to do all the things alone I thought. Skype didn’t help. Meanwhile Kedia and Rai were doing what they do in free time – Movies, TV Shows and books. Not a care!

The IISER Auditorium was mostly empty. There was no CNBC this time. No cameras! We wouldn’t be on TV! Was I so bad, so ugly the last time? I thought. After the prelims, however I stopped having such thoughts. Why? BECAUSE WE WOULDN’T EVEN QUALIFY! Both RD and Me got hardly 14 questions right! Rest being complete guesses. People were getting so many correct. We missed the seemingly obvious ones – the ones which other could crack. Seeing other people able to get the answer and looking at my own helplessness, broke me from within. I wanted to win, but here I wouldn’t qualify. The thought of getting away from all of these and going back to Thapar crossed my mind several times. I had lost way too many times. In many different fields. I was tired. Didn’t want to go through the process again. I am not a multi-talented person. There’s only one thing I can do better than the rest and seeing that I wouldn’t be able to achieve even that made me very, very depressed. My heart wanted to go to the bathroom, lock myself in one of the stalls and cry. Yes, I was that sad. I have lost often and the feeling is not good.

Piecing myself together, I went reluctantly to the auditorium. Giri started with his usual booming voice complaining about the cold and then announcing the participants of the Wildcard round. We made! As did Aabhas and ARa. I was shocked. How could it be? A voice within told me – It’s a buzzer round, you won’t make it past. 6 questions on the buzzer. No visuals.

First question – TIME Magazine has since the 1930’s have Person ….. buzzzzz

IISER got it. Didn’t let Giri complete the question. Were too early way out of the mark. Wrong answer. Minus one. My heart was beating fast. My fingers were shaking.

Second question – Sometimes some special names are given to aircrafts…… buzzzz

I PRESSED THE BUZZER AND I DIDN’T EVEN KNOW THE COMPLETE QUESTION. AN INVOLUNTARY ACTION. I had to give an answer. I was blank. Looked at RD. Didn’t know. Resigned to my fate and blurted out Lockheed Martin. After hearing the complete question, I wanted to bang my head. Shepherd One – Pope. A well-deserved negative was what we got. My face cringed. When things are going bad, there is a chance that the worst may not be over yet.

I got the buzzer. Complete voluntary action. Kingfisher it was. Plus one. We were now back in the game. 3 questions done, 3 more to go. One team on minus one. Others were nil.

Fourth question – Rolex is the official time keeper of which tennis…. Buzz

RD got it. Wimbledon. She likes Roger Federer so it was imperative. We were leading. We could have easily got the into the top 2. No need to play further. Giri made the same remark. Both RD and me were relaxed.

Fifth question – Mica is a bearing maker. Of which German automobile giant is it a part of?

Kedia and Rai got it. A wrong answer. Everything can’t be Volkswagen. 5 questions done. 2 teams were on negative. We had qualified. A relief!

I pressed the buzzer. The silence of the audi resulting from the act was intense. I didn’t even let him complete the question. Did I make a mistake? Did I play too far? No. I knew the answer. All the school quizzes in Jamshedpur and in CMS, Lucknow came back to me.

Akio Morita was one of the founders of Sony. He created the Walkman.

Giri was doubtful. Said, “Thapar, you gave me two answers. I need one. What is it?”

My heart stopped. Shit! What did I do? Why am I so stupid? Now I am surely out. RD must have been pokerfaced at my sudden act. Why did he press the buzzer? What was the need? May have been angry too. I don’t know. I had my own conscience to answer to.

Broken hearted, I came closer to the mike and answered a feeble Sony. Giri was silent. I was dead.

Then he burst out, “I was just joking! You have already given me the answer and qualified for the finals!”

Plus 2 from minus 1! We were going to the next round! The wave of jubilation ran through me. We were both so, so relieved! Giri has a certain amount of proclivity for throwing such badly timed ‘acts’.

The finals began soon after and we started cruising. The first few questions were easy enough for me. Unlike last time, we played big. Maximized the score of each question. 150 every time. RD got her Sabyasachi correct, I got my TCS and few others correct. I bet others were a bit flummoxed at Sabyasachi. Chandigarh, you can’t beat RD and Sabyasachi. Ever.

The quiz proceeded swiftly. But we didn’t. Missed many easy ones. We were slow. We were leading with 450 points but others were coming up fast. We needed to do something to maintain our lead. I was close to my goal but one question gave UIET, Chandigarh the lead. 500 points. We were second. Giri was continuously displaying the score sheet. I wanted none of it. Just get it over soon with – my inner self quipped.

Last Question. We decided to play the Bami Card (refer to my last post on Tata Crucible).

Choudhary, Rai, Arora and others were edging us on for the buzzer from the audience. We were determined. RD more than me though. I am always terrified of the buzzers.

A connect question. A book cover, an app logo and a video. My mind took some long and painful time to process the book and logo. But not long enough for others to go for the buzzers. Buzzzzz. We got it. Damn! My mike wasn’t working! I took RD’s and blurted out in such a hurry that Giri couldn’t register.

I pseudo calmed down. ALIBABA. Explained the book cover, the logo and Vijay Shekhar Sharma’s connect.

Both of us might have literally jumped out of our seats on stage. We won Tata Crucible Campus Quiz 2018 from Chandigarh! WE WON IT! We would be going for the zonals! All my depressed and melancholic mood vanished. I have never been so, so happy and proud of myself in life.

And we got 75000 rupees and some goodies (which were actually not good or half as useful compared to last year). We earned it! Wowie! There was a slight error on Greycaps part which we would have gladly overlooked if we hadn’t won – the cheque was for Sonepat and not Chandigarh. So what you see below, is a photoshopped version of the original. Hail Adobe!

29th was also a day of many firsts for me. One I got to win a quiz and second, I went to Taco Bell! Jamshedpur doesn’t provide me with too many options. Thankfully Chandigarh does. 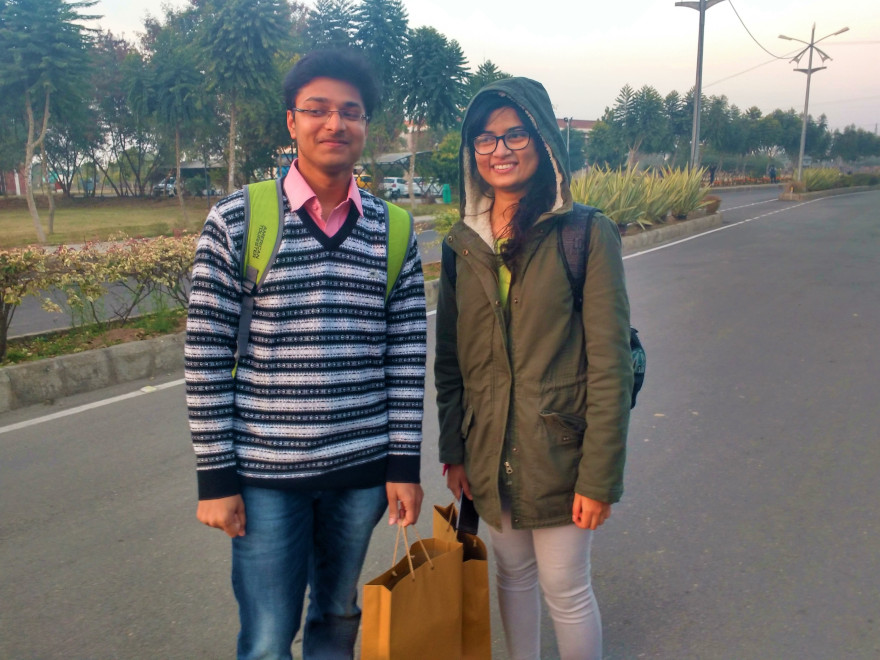 PS – I waited 12 years for winning a quiz contest. I had lacked a dedicated and like-minded teammate. I lacked trust. Not anymore. I got the best teammate ever.