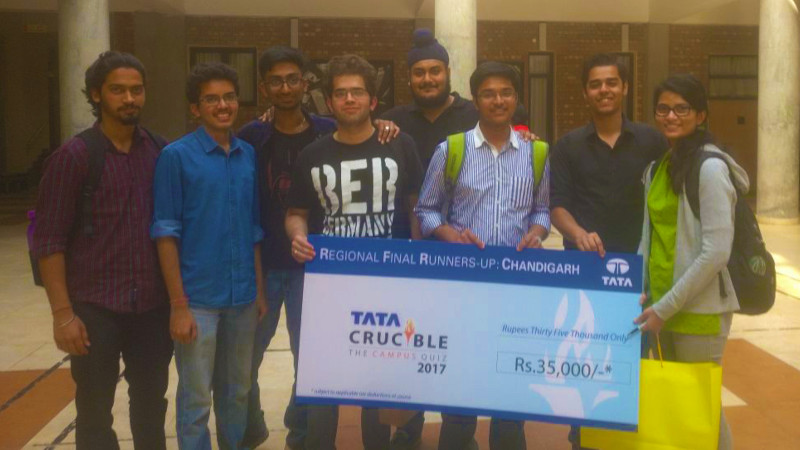 Of Tata Crucibles and Mid Sessionals

February 2011, Jamshedpur – On an early bright late winter morning, with The Telegraph in my hand, the cup of tea and the necessary Marie biskoot I began to flip through the pages of the paper. In the local Jamshedpur pullout section (Yes, Telegraph was generous back in the 2011 era) I came across the news report of the city leg of Tata Crucible Campus Edition. Curiosity took over me. I never realized that there was a national level quiz for college too. A few teaser questions were also given and surprisingly I could answer one or two. I was happy that I could at least answer (read try) college level quiz question. And thus began my acquaintance with Tata Crucible.

August 2016, Patiala – Coming to Thapar University for my undergraduate studies, I had decided that I would be involved into extra-curricular activities just like the school days. And participating in Tata Crucible was one of my prime motives. But like every time I was in a fix. Where would I get a partner? Would I find that person to be as motivated as me? But most importantly would that person be an experienced quizzer? I really wanted a permanent teammate for our quizzing endeavors. From late night discussions to the necessary high-five when we crack a question – I was excited to find him.

And yes I did find ‘him’. 1st September, 2016. Fresher’s Quiz. It was RD and it was a ‘she’. Now here I would pause and explain and why I had made that assumption– Too few girls are interested in quizzing and I have seen very of them actually loving it. I had never imagined that the very first person to be present in the room would be girl. I pardon my judgement.

As the months passed, I found that she was as crazy, as motivated and passionate about quizzes. She had participated in school quizzes and was also a part of her undergrad college’s quiz club. Yay! But not enough confident in herself. Still yay! I found my teammate! Now the excitement starts to build up. For us Crucible was cherished dream.

Fast forward – January, 2017. Dates announced. But oh! Wait! There was dismay on our faces. The dates for Chandigarh would be clashing with Mid Sessional Tests. So much for being excited and telling the whole world that I am going to take part and win. I was particularly sad thinking that a 6-year dream would never be fulfilled. And I simply couldn’t miss or screw up my MST’s for a quiz – because you know, just some middle class Indian things. So I never even bothered to do some prep for it knowing that it would be useless.

Now funnily, sometime in mid-February the Thapar administration decided to change the MST dates which was supposed to begin from 13th March to 20th March. I guess they found at last that there is an Indian festival called Holi which coincidentally was also on 13th. The news spread like wild fire through the college. My WhatsApp was abuzz. You couldn’t imagine how happy I was that day. Sitting in my chemistry lab I messaged RD that TC is a go! Giving totally no damn to the fact that the lab assistant was watching me. A few cursory glances later he left me.

Now Crucibles was on 18th March and MST was from 20sup>th</sup> March. I thought that with the reading week I would be somewhat cushioned. Hahaha – time thought. Hahahahahaha – syllabus cried out loud. I was deaf to these omens.

With that news I started my prep with full passion. I use the word passion because that’s what represented my state of my mind at that time. Coming from Jamshedpur and growing around the Tata culture I was particularly in love with it. Every Tata question, every Jamshedpur question which ever came in TC I believed as if I had a special connection to it. For others it meant just a question. But for me it meant home – of sweet tidings, Jubilee Park, Keenan Stadium and Dimna Lake.

From meeting in the library to the canteen, both Rajenki and I divided the topics so meticulously that no sector was left untouched. India Business Quiz, Crucible Chronicles, Slide Share and Wikipedia became the most visited websites on our browsers. We discussed codenames, advertisements and current affairs over popcorn and mango bite. And all these happened in the reading week. With fear in our hearts we still proceeded.

Reward is in the risks.

18th March, 2017 – TC was being held in IISER Mohali. The prelims were supposed to start at 1 PM. As usual it was delayed to 1:45. 20 questions on the prelims. (You can view it here) And thus it began. Q1, a guess. Q4, we didn’t know – another guess. As the questions progressed we were in somewhat comfortable position. Still we after it we didn’t breathe a word about it to anyone. Some deliberations later we were sitting with a comfortable 18 and hoped to qualify for the finals directly. Our very first attempt and direct to the finals! Not a bad start. Now Jain and Bami both seasoned TC quizzers qualified for the Knockout. And they made it to the finals on the very last questions.

And the second team to qualify is from Thapar University, RD and SB. 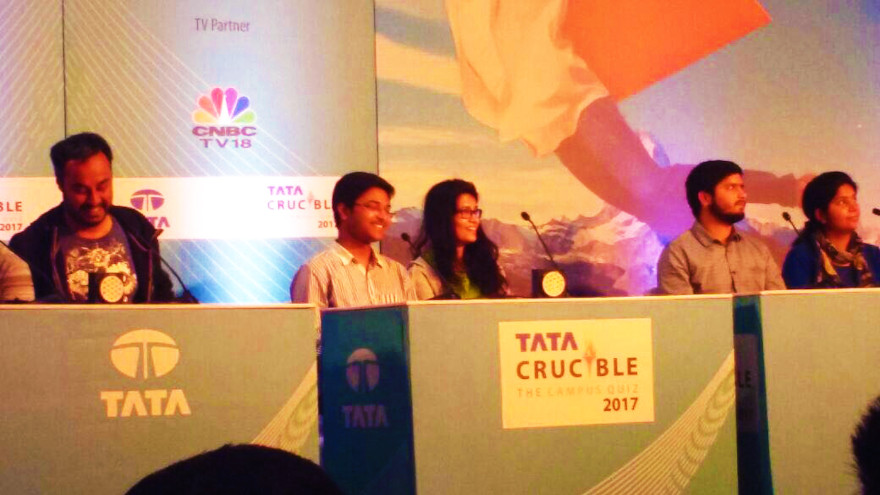 And the final team to qualify is again from Thapar University, AJ and HSB.

We made it! Finally! Yippie! Two teams from Thapar into the finals!

All the questions were on buzzers which made me even more nervous. I always faltered at this precise junction. I told RD, “Press the buzzer even if you are 0.1% sure we will work it out later.”

Still we were slow. I missed a couple of easy peasy ones. Got IBM, played too conservatively on Le Eco. Got Tata Communications. Missed Tata Power Renewable Energy, Byju’s and lot more.

The interesting part is we had answered only 3 questions but still we were second with 225 points. And with just 3 more to go, IISER Mohali played aggressively. 150 at one point to 0 at the next negative. Two questions were done. With only one more to go. Both of us realized that we didn’t have a chance to get over UBS who were leading with 375. But both of us never realized that Bami would press in the last question.

It was a Bollywood one. Asking about Saif Ali Khan’s production house. One Illuminati later, they went in for the bonus and another Love Aaj Kal later they were at 250!

The last question! Damn! Both of us were so dismayed yet happy. We could do nothing at this stage but just think about our hard luck. Within 10 minutes Rs. 35000 which could have been ours went to Jain and Bami. Yet we were proud and happy for them. It took them 4 years to reach to that level and it was their Crucible together.

Still a bad luck is a bad luck. For one whole week both of us were simply ruing ourselves. Whats done is done. Next time perhaps.

A selfie stick, a bag, a Logitech Bluetooth speaker and a Fastrack watch were ours. Thankfully I don’t have a watch for another few years. The present one is in use from 2011. (Too much love for it).

Before the start of the finals, Giri mentioned that CNBC would be covering the event and Chandigarh is one of the very few cities to enjoy that privilege. So do see us on TV if you are reading this!

20th March – Midsems begins. Let’s leave it at that. It’s too embarrassing for me document about that experience. I didn’t heed to the signs and I will remember this for a long, long time.

To cope up with the damages done I will be taking a (brief) sabbatical from the quizzing domain. I hope its brief but with my luck on my side, I can’t tell when this self-imposed exile will actually end.