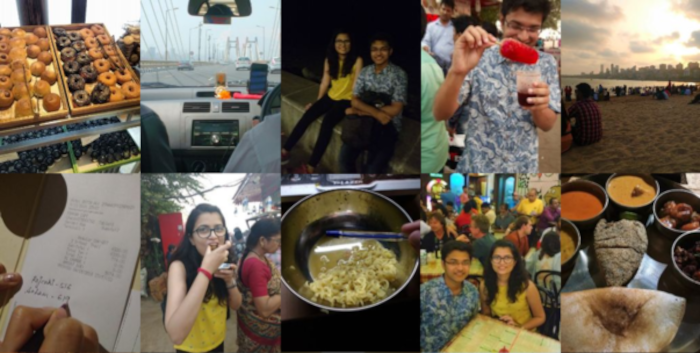 The Joy of Achievement

How does one feel when a dream which has been kept confined for years suddenly becomes real? How does one feel when The Dream which has never been shared with anyone else finds an echo in another soul and then reflects back with such force and optimism that nothing can stop it from coming out in the open? How would you describe perhaps the only moment whence you feel proud of yourself?

Borrowing the title of this post from a book (which I am yet to read) would be in complete symbiosis with my thoughts and emotions. I should have done this post long ago lest the day fuzzies out of my mind and withers away into oblivion. Days have passed since 14th April, 2018 and now in August I hope to remember enough to warrant this writing. Ever since my school life I have wished to travel and win quizzes. The two never coincided. Till now.

Sometime back in January, RD and I had won the Chandigarh round of Tata Crucible. Then again in March we were the runners up in the Delhi zonals securing our ticket for the National Finals. It all felt surreal back then on 17th March in Delhi. While I was visibly excited and happy, RD was not. To this day I keep wondering to what kept her from celebrating or even smiling. Surreal was knowing when you have qualified for the Nationals, missing ones’s (mine) Volvo bus from Delhi to Patiala and then covering the journey at 9 PM on a PRTC bus is definitely not. I have a certain bad luck associated with missing the bus from Delhi for my half yearly pilgrimage to Patiala. RD took the wrong metro home. So, in a way balance was maintained. Delhi was done. Vivanta by Taj, Dwarka was done. Giving my first TV interview was done. Winning a Kindle and another Fastrack done too. While I made the journey alone, I had these few materialistic possessions and an experience to remember to give me company.

Collaborating over Google Sheets, Skype and the countless emails exchanged for the finals was a time to remember. Also, the period of un-collaborating for a few days in between. Ahem. I would better leave these details out.

I have always been a proponent of things not going smooth in order to achieve something. A skewed perspective I agree. The early hours of 14th April were however smooth and this unsettled me a bit. I wanted us to win. At stake was a Tata Zest (each), enough prize money to pay the increasing fees of Thapar for one semester, one international trip to inaugurate my never-used-before passport, two trophies, one huge cheque and bragging rights for the rest of our lives.

Not finding a spoon to eat Maggi, improvising my pens as chopsticks instead, I was still unfazed. Little oversight is done all the times but the guard locking up the girl’s hostel’s gate and getting a call from RD that she cannot come out – seldom. Perhaps it was my drowsiness or the voice of RD that I didn’t pay much attention to it.

She cannot come out of the hostel. Okay. She will somehow. Poor me. Ignorant me.

Waiting outside the gate in the car for more than 10 minutes my thoughts were still in ticking off things in my to do list. Huffing, puffing and a little annoyed at my perceived ignorance to the working of things, she came. The sight of her huge suitcase confused me a bit. Our Bombay trip was for barely 2 days.

RD – Oh! No. It is actually very light. It’s for the trophies

We are going to win today, I thought. Secretly wishing that some unsmoothness creeps into our day before the finals begins. I still did not pay much attention to what RD kept saying about the troubles she went through when she found gate locked. Still sleepy. Still blissfully unaware.

Landing an hour early at the airport after what was my first flying experience which I did not enjoy at all – cold food, ears popping, weird sensation during takeoff, some light turbulence and fake, cold smiles from the air hostesses, I was not too happy. The novelty of my first flight wore off soon enough. The shiny interiors of the Bandra airport was a stark contrast to the Indian railway stations where the true heart lies. Overpriced cafeterias and security checks takes the joy away. I guess the joy of flying is only reserved for the deep pockets. Or maybe I am still naïve in the ways of airports and planes.

We were booked at Vivanta by Taj, Colaba. The Uber ride from airport to hotel was one to remember which none of us can forget in the near future. It wasn’t witnessing the Bandra – Worli Sealink, Antilla up close but our driver.

His questions were endless, his enthusiasm in showing and telling us about his city was relentless. In the 1 hour drive he told us his life story, about his family and his son in the Mumbaikar accent which I thought only existed in movies. There is simply something about cities such as Bombay, which over centuries has acquired a uniqueness of flavour that leaves visitors like us in amazement.

Staying for an all-paid room at Taj for the second time had heightened my desires for materialistic comforts and money. It was Taj after all. And from here the chinks in the smoothness of our day began to appear.

We did not get rooms for almost 90 minutes. We were tired, sleep deprived and dead nervous for the evening. Even waiting in the lounge and getting complementary coffee did not lift our moods. Both of us were getting jittery and impatient. Playing Wordament did not help too and I lost to RD in each of the games. Our driver had told us enough stories to warrant another round of talks with each other. By the time we got our rooms, it was already 2 in the afternoon. The Finals were at 4. No time to catch some sleep and our stomachs were making growling. Then we made a bad decision.

For lunch we decided to go to the Konkan Café restaurant which serves a platter inspired from the Western coast of India and ordered a veg thali (Saturday -_-) . We wanted a simple lunch. What we got was rasam, five different types of South Indian dishes in small brass bowls whose names I cannot pronounce but all of them tasted sour (as expected). Some papad, veg pulao, plain rice, uttapam and perhaps jalebi. It was a complicated lunch. Being quintessential Bengalis that we were it was revolting to us. Both of us wished for some simple aloo sheddo bhaat and some daal (We don’t like fish all the time, you stereotypers) . Again, remember that we were not accustomed to the Taj ways.

A sorry lunch indeed. Some part of me was happy. Not Smooth! 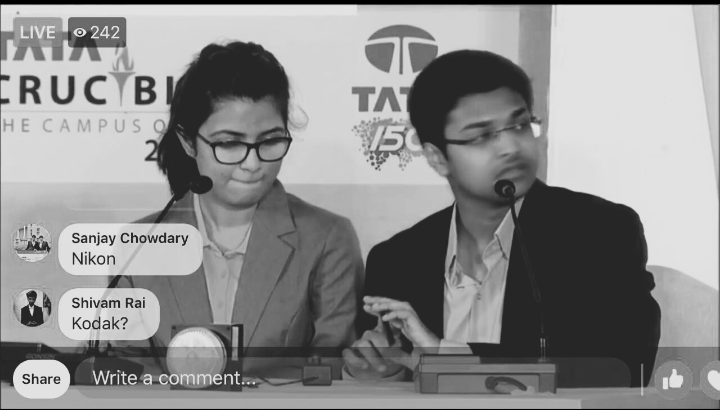 We lost. We underestimated. We were slow. We were afraid.

RD’s green shirt or bright orange socks didn’t work. RD’s colourful pens which we each held in our hands firmly and my old battered watch couldn’t conjure up the same magic as before or filling each of my coat pockets with chocolates didn’t bring in the joy which we were supposed to be a part of at the end. Oh yes, we had our share of lucky charms.

Shattered would be perhaps an easier word to describe the moments which I will omit from here. It was too painful for us. We were the perfect team. But so were others. At the end, the best won. It may have been days since but the feel of loss is still fresh. No one likes to lose when you have gone so far. But, I guess this was the way it was meant to be.

I hate consolations. I personally do not like to share my loss with anyone else. The feeling of helplessness overwhelms me. My cousin and UA who made it to venue to watch the finals and cheer us tried their very best. But truth be told it didn’t help us. At least to me. It was nice to have them around though. Familiar faces in a sea of strangers is always a good sight.

We missed our 3-course dinner again. A light Italian dinner atop a hotel’s terrace with the four of us enjoying the enticing view of the Marine Drive and feeling the gentle breeze while another round of pasta was served made up for the day.

This is the day I (and perhaps RD and I) will the cherish the most. The much-needed sleep helped to wipe the sadness from us a little. The buffet breakfast did the rest. The chicken cheese omelette brought the smile back. Having again an Italian 3-course lunch at Trattoria brought our happy selves back. Having an entire day to ourselves was another novelty which we were yet to unlock.

Sitting on the sandy beach of Chowpatty and the watching the sunset, having ice lollies and pani puri from the food stalls nearby was a treat in itself. A short trip to Colaba Causeway Market and then Leopold Café, wondering at the brilliance of the murals of Mario Miranda over a simple chicken sandwich in Café Mondegar gave us the happiness which was lost the day before.

I am perhaps understating that day. Writing about it, it sounds boring. But experiencing it was as different as it could be. I wish I could bring in even one iota of the vibrancy from the moment we experienced.

Back to our hotel, we didn’t miss our dinner (our last 5-star dinner) this time. Our appetite was nonexistent. Our cravings for our last dinner wasn’t. Konkan Café again. Non-vegetarian sea food thali. Looking at the plate in front of us with fried pomfret made us give in to our fake hunger. Man vs Food. 30 minutes later. Food won. Man lost. Man couldn’t move.

Coming from a middle-class family, wasting food was an offence of unimaginable proportions. The plate always had to be cleaned off lest a reprimand from father. This time, looking at time half eaten fish, jalebi, and other South Indian dishes (which I again cannot recall) on our plate we were too full to even give a damn about it. Sorry, Baba and Maa. Next time I will not waste food from a five-star hotel.

We were so overwhelmed that we did not even recheck the timings of the flight next day. We kept making early morning plans. Only when I was done for the day and was ready to slumber, I got a phone call from RD to learn that the flight was much earlier.

The reality dawned quite soon.

Even on our way to the airport, we had some crazy whims. However, 15th April 2018 was a day to remember; a fine beginning to the Bengali New Year.

As I sit in my hostel room and type this, I realized that for us it was the experience and the time we spent our prize. We lost on the material front. We won on the experience. Such beautiful moments come rarely. Later we found that we were the only ones having an extra day to spend since the Chandigarh Airport remains closed on Sundays. Fate? Destiny? Who knows? The Joy of Achievement did not lie in the Kindles we won, the days we spent at Taj Hotels or even the (no, money is important) we won. Instead it lay with the time we had and we spent and the journey we had. While RD’s suitcase was no heavier than before, both of us were. Making our way back to Patiala, back to our mundane, real life – RD to her thesis (which would take months to complete) and me to saving my semester (which eventually couldn’t be done) was difficult. Waking up from a dream is always hard and sad. 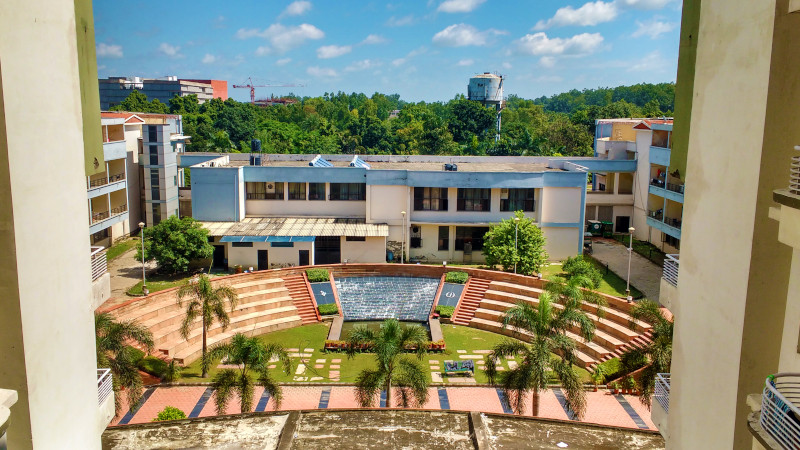